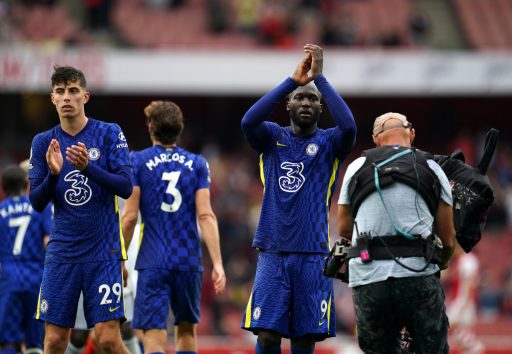 Chelsea fans react over star player yet to served Lukaku with since arrival. A lot of mixed reaction as Chelsea’s fans on social media reviewed a statistic that showed Kai Havertz hasn’t made a Premier League pass to Romelu Lukaku.

According to SkySport, who revealed this, that number of times Lukaku has either received a pass from his teammates in the league this season, or vice versa. Except, Cesar Azpilicueta, who has served the Belgian player, Romelu Lukaku, almost 17 times passed.

Not once has the young German located Lukaku in the top flight this year.

Understandably, Blues fans were totally baffled by this revelation.

Meanwhile, Not only Cesar Azpilicueta who has served Lukaku with a passed, Mateo Kovacic does too, as he has obtained 16 pieces of possession from him.

Here are Chelsea’s fans reactions on social media below;

That Havertz guy passed to Timo even when there was no space but even when there’s space he doesn’t pass to Lukaku .. Agenda against king Luka to Favour his German counterpart 🥺🥺🥺💔

Havertz hasn’t passed to him once 😭

No way Kai hasn’t passed to Lukaku all season… https://t.co/eNl0PbAItQ