“I hope Lionel Messi will play for Barcelona again- Laporta 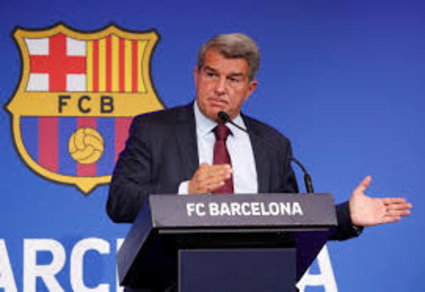 Do you think it is possible for Lionel Messi to play for Barcelona again?, or would PSG be ready to released Messi to Barcelona or any other clubs again?, “Yes” In the world of sport, it is possible.

Barcelona president Joan Laporta admitted on Friday he hoped Lionel Messi would change his mind about leaving the club and offer to play for free.

Messi joined Paris Saint-Germain in August after Barca decided not to renew the Argentinian’s contract due to La Liga’s strict salary limits.

“There came a time when both parties saw that it would not be possible. There was a disappointment on both sides,” Laporta told Catalan radio station RAC1.

“He wanted to stay but they also had a lot of pressure because of the offer they had. They knew if he didn’t stay, he would go to PSG.”

Laporta continued: “I hoped Messi would do a u-turn and he would say he would play for free.

“I would have liked that and I would have been all for it. It is my understanding La Liga would have accepted it. But we cannot ask a player of Messi’s stature to do this.”

Laporta reiterated the club’s atrocious financial situation meant they were unable to keep Messi on the same terms.

“We had the conclusions of the audit (on Wednesday) and the investment in Leo would have put us at risk,” said Laporta, who also suggested Barcelona could yet sign up to a deal with investment fund CVC Capital Partners.

La Liga told Barca in August they could keep Messi if they agreed to the deal, which involved the league selling 10 percent of the commercial business, including television rights, for the next 50 years, in exchange for 2.7 billion euros.

“We do not need more debt,” said Laporta. “I understand La Liga clubs are suffering. We have not ruled ourselves out of this operation but they have to change it. They are trying to reformulate the deal.”

Laporta also confirmed his support for Barcelona coach Ronald Koeman, whose future has been uncertain in recent weeks.

“I think he deserves a margin of confidence,” said Laporta. “I asked him if he trusted the team and he said, ‘Of course I trust them. I need to get the injured players back. He wants to continue at all costs and show this team is competitive.”