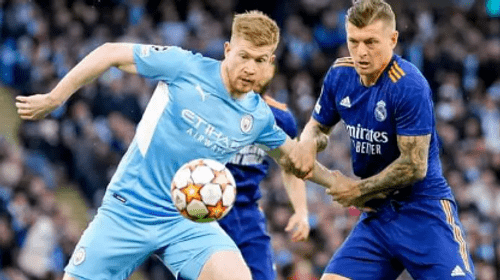 Manchester City travel to face Real Madrid for the second leg of the 2021/22 the UEFA Champions League semifinal with a one goal difference in their last match 4-3.

The tie is well balanced though Pep Guardiola will be aggrieved to have only taken a 1-goal lead from the first leg at the Etihad.

Manchester City have bagged three straight wins against Real Madrid after the 4-3 win at the Etihad. Only Ajax and Bayern Munich had won straight games against the Los Blancos.

Five of the overall 7 Champions League meetings between the teams saw 3 or more goals with both teams scoring.

While Real Madrid confirmed their status as national champions with a 4-0 win at the weekend, City’s identical victory over Leeds United only leaves them one point clear of Liverpool.

The likes of Benzema, Vinicius, Toni Kross and Ferland Mendy were all benched at the weekend with this encounter in mind, and Rodrigo will hope to keep his place in the final third after starting in the first leg and bagging a brace against Espanyol.

Manchester City Team News
Kyle Walker could recover in time to face Real Madrid, but the last time Guardiola rushed a player back John Stones limped out of the first game with Real and hasn’t been seen since. That makes it more likely that one of Nathan Ake and Oleksandr Zinchenko will be used at left-back.