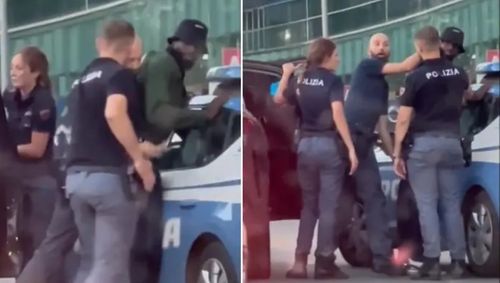 As it goes viral on the social media that Chelsea midfielder, Tiemoue Bakayoko has been arrested by the Italian police after dragging out of his car on check and stop operation. Although, it seems to have been a case of mistaken identity.

Here is how to watch the video clip below as the Frenchman, who has been on loan at AC Milan, was dragged out of his car and searched by police officers…

Italian police pulled AC Milan’s Bakayoko over to search him until they realized it was him. This is scary. pic.twitter.com/FkFhyIqcJe

Bakayoko is clearly still based in Italy despite technically still being a Chelsea player, but his future is up in the air this summer.

Thomas Tuchel and his wife ends 13 years of marriage, reason why

With this simple act, it’s unpleasant to get the Chelsea ace or not embarrassed by the Italian police, which Bakayoko treated aggressively by these police officers despite not doing anything wrong.